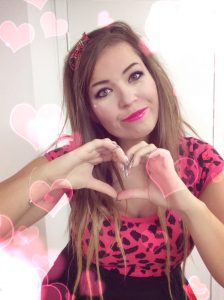 Since I was a very young kid, I was always interested in music.

My mother noticed, when I was 3 years old, that I immediately learned the children’s songs that she was showing me to play on the piano. So she taught me the songs she knew, and I was playing with two hands.

My mom didn’t want my music interest to be destroyed by forcing me to play after notes at such an early age, and take away the joy I had for playing. She called a famous music school, and explained that she was looking for a piano teacher that was willing to listen to her request, and give me piano lessons.

I could choose what I wanted to play, and she played part of the song, and I played what I had heard. The teacher noticed my fast ability to learn songs by ear. I only went there for a short time because we moved abroad, but I was encouraged by my family to continue playing the piano, and they supplied me with keyboards and pianos.

​I remember when I was 9 years old I’d developed a good ear for memorizing music, but I wasn’t aware of my rare talent until I found my old piano teacher again, and asked her to show me how to play a certain song, but she didn’t know the song, so I sat down at the piano and showed her how the song went, she looked at me with big eyes and said, “Emmy, you already know the song. You don’t need me to teach you.”

​At times I struggled, but I was stubborn and really wanted to play and learn the latest hit songs. Sometimes the songs were very difficult and didn’t sound right, it made me very frustrated!

My mom told me how to think: “It’s like an airplane, it requires a lot of power to fly up above the clouds, but when you are up there it goes by itself, and you can just fly.” This applies to anything you want to learn in life.

That became true for me, and now I am flying and it’s the best feeling in the world!